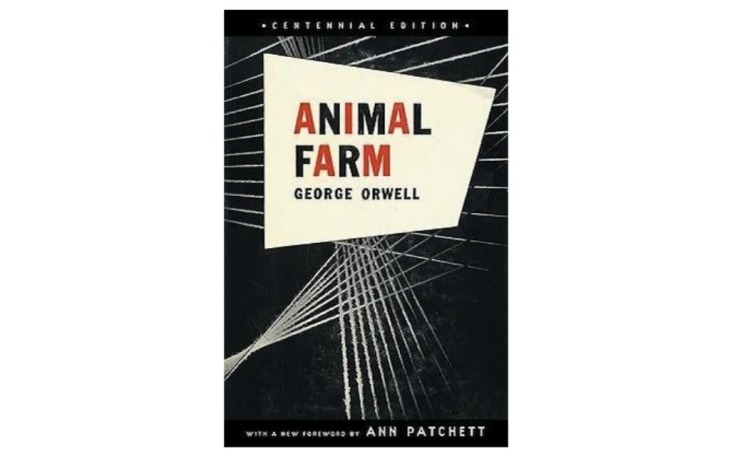 I’m really surprised that I’ve never read Animal Farm by George Orwell until now. I’ve heard about the book and have been wanting to read it for quite a while now, but somehow I just got around to it. I finally picked it up as I had a short plane ride and this really small and thin book looks perfect for it; I finished reading the whole book within the 2hour flight.

**This part of the review consist of Spoilers

Old Major, the old boar on the Manor Farm, summons the animals for a meeting, where he tells them of a dream of life without men and teaches them a song called “Beasts of England”. When Old Major dies, two young pigs, Snowball and Napolean, takes command. The animals revolt and drive the farmer Jones away, then renames the farm “Animal Farm”. They adopt the Seven Commandments of Animalism, the most important of which is, “All animals are equal.” After the revolution, the farm runs smoothly. The pigs are the smartest and become the leaders; they set aside special food items “for their health”.

Jones attempts to recapture the farm with the help of other farmers who fears similar animal revolts. Snowball, who has been studying the battles of Julius Caesar, guides the animals to a victory; this event is named “The Battle of the Cowshed”. When Snowball announces plans to build a windmill, Napoleon chases him away with his dogs, declares himself the leader and replaces meetings with a committee of pigs who will run the farm. The animals work hard to build the windmill, with the promise that life will be easier. Napoleon begins to purge the farm, killing animals he accuses of siding with Snowball. The animals remain convinced that they are better off than they were under Mr. Jones.

Mr Frederick attacks the farm. Though the animals win, many are wounded, including Boxer the workhorse. Boxer collapses and Napoleon sends for a van to take Boxer to the vet. The donkey Benjamin notices that the van belongs to a knacker but the pig Squealer assures the animals that the van had been purchased by an animal hospital. Later, Squealer reports that Boxer died at the hospital. The truth is Napoleon sold Boxer to the knacker.

Years pass and many of the animals who were in the Revolution are dead while the pigs start to resemble humans. The Seven Commandments are changed to “All animals are equal but some animals are more equal than others”. Napoleon holds a party for the pigs and local farmers, which he has now formed an alliance with, and renames the farm to “Manor Farm”. The animals realise they can’t distinguish between the pigs from the humans.

I really enjoyed reading this book – it’s very different from the kind of books that I usually like. I fall asleep whenever I start reading about history or politics, but this gave a very interesting twist and captured my attention all the way. I love it. Also with the world in a political mess, without giving too much of my own personal political views, I thought it’s very interesting how the book reflects some of the issues that are unfolding around the world.

I really don’t want to write a lengthy review because the book is already so short – so it doesn’t make sense to write a longer review than the book. But I find it to be a really powerful little book with so many hidden messages; the story telling is so simple but the messages are deep and thought-provoking. It’s definitely worth a read.